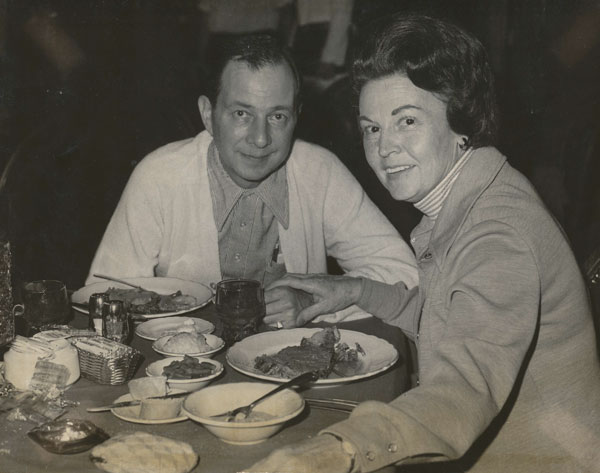 It all started in a bowling alley many years ago. Dorothy Ann “Annie” Blair, born and raised in Webb, Iowa, first met Alan Fleishman, the Omaha native, when they both were bowling in invitational leagues. This shared hobby drew them together, but the love that developed is what kept them together until Alan’s death in 1985.  Annie and Al were married in August of 1957, first in a civil ceremony, and then a day later in a Jewish wedding in Denver officiated by Rabbi Joseph Freedman. They shared 28 years of marriage.

Al was a Central High School graduate, continuing on to the University of Nebraska in Lincoln. During and after high school, Al sang in a quartet. He served in the Coast Guard for two years.  Al was the Vice President and General Manager of all the Village Inn restaurants in Omaha, and  Annie worked for a utility company for the first few years of their marriage. She was an American Red Cross volunteer, with 33 years of service to that organization.

Both Annie and Al were only children, and did not have children of their own. Nevertheless, they both loved children, and this would be evident in their estate planning. Al was sick for a long time before his death, and during this time, he and Annie had discussions about what they would do with their estate. An endowment that helped young people was a natural choice for them.

In October of 1994, nine years after Alan’s death, Annie established the Alan and Annie Fleishman Scholarship Fund. The fund awards scholarships to Omaha area Jewish students who have financial need to attend a college or university of their choice. The first scholarship was awarded in 1992, and the fund has continued helping students pursue higher education ever since.

Marty Ricks, former Foundation Executive Director, recalled meeting Annie, “I met Annie for lunch probably ten years ago. It was one of those ‘three martini’ lunches, without the martinis. She talked fondly about her late husband, Al, and the wonderful life they had. Although a mixed marriage, Annie embraced Judaism to the fullest. She told me her and Al’s plan was already in place to benefit the Jewish Federation of Omaha after her death, doing it through the Jewish Federation of Omaha Foundation. It was wonderful that they chose to help college kids with financial need. They were certainly cognizant of the exploding cost of college tuition over the last many decades.”

Annie thoughtfully planned for the time when she would no longer be here. She named the Jewish Federation of Omaha Foundation as beneficiary of a life insurance policy, with the money to be directed to her scholarship fund. Nine days before her 95th birthday, on January 17, 2017, Annie passed away.

The legacy of Annie and Al is, and will continue to be, the many students who have attended college or university due to the Fleishman’s generosity. What a wonderful legacy for a hometown boy and a girl from Webb, Iowa. On behalf of all the students past, present and future, thank you, Annie and Al.